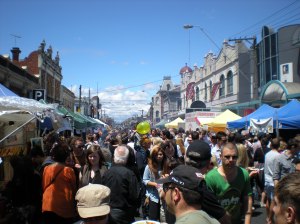 The large crowds at the Hispanic fiesta on Johnston Street

With festivals a plenty throughout Melbourne each year, it is sometimes easy to gloss over them and feel they all overlap into one, yearlong celebration of the arts. It is true Melbournians are very proud of their cultural connections and celebrations of carnivals, fetes and fairs yet it is overwhelming to keep track of what comes next. Some of the bigger festivals are all too familiar, the Melbourne Festival in October, the Fringe Festival before that and up next Melbourne Music Week. Although each and every one of these festivals brings a great deal of local talent to the foreground, it is the smaller festivals that tend to create a scene. Last week was the Hispanic Fiesta in the streets of Fitzroy over the weekend. Despite a rather large group of disgruntled drivers due to the road blockage of Johnston Street, nothing managed to take the limelight away from the festivities. From 12pm daily, hordes of people flocked to the area to participate in salsa, flamingo and tango lessons, listen to live, local music and most importantly, taste the sensations of Hispanic cuisine. The crowds were extensive.

I managed to visit twice (mostly so I could stock up on enough Hispanic cuisine to never want to eat it again… Joking, I had it last night) once on Saturday night, where the blocked off area proved to be very difficult for crowd control. Amazing but a little claustrophobic – I opted out and returned during the day on Sunday for a much more civilised experience. Alcohol free, for obvious reasons, this did not stop many from bringing it into the venue on Saturday, or arriving drunk for a late night meal and despite the large numbers, everyone was well behaved and respecting of the cause.

The food was the obvious highlight and local Mexican, Argentinean, Spanish and Peruvian restaurants set up to share their most popular dishes. A tough festival for vegetarians, meat was the driver of the show from BBQ, chorizo sausages and seafood to char-grilled spit roasts, meat was the heart of the fiesta. 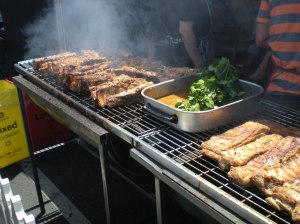 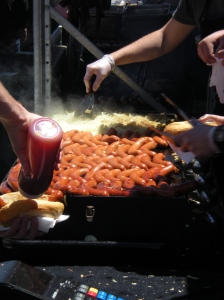 Did somebody say MEAT? 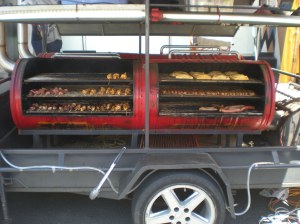 …I think I’ll have the meat.

On a more vegetarian friendly note, I was very confused to see Bubble Cup stands, “Mr Whipp” with two vans and a crepe van set up at the festival; all of which must have become Hispanic and traded in their former ethnic ties in the lead up to the festival. Despite this oddity, I did not complain and helped myself to a strawberry pearl Bubble Cup to wash down my chicken burrito, chorizo with onion and cheese, empanadas and of course RIBBS (that actually was not me, but my very over excited partner). Of all things, the lemonade stands scattered throughout the street were a real highlight and provided some much needed quench to the thirst of running from BBQ to BBQ and pushing through the crowds. 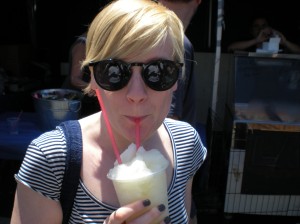 Iced lemonade… and my first sunburn of the summer

The smells of different foods wafted though the surrounding streets and the genuine happiness on people’s faces was pleasant to see for a change. Everyone let their hair down and enjoyed the day for what it was; Melbournians from all different cultural backgrounds not just Hispanic got together with the local Hispanic community and a large number of tourists and travellers looking for a cheap feed and celebrated being together over food, like Melbournians from any cultural enjoy doing. 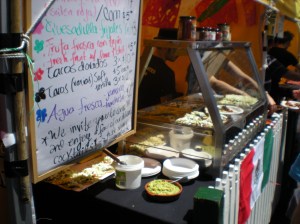