Life on a tram. 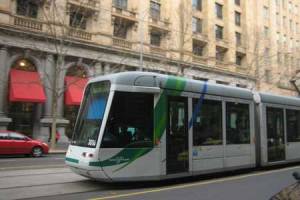 One thing missing from most cities around the world is tram travel. Fortunately the great cities of Toronto, Lucerne and Melbourne are the lucky ones. Trams are a novelty, attracting the interest of not only tourists, but also locals alike and more often than not, tend to confuse the hell out of both. As a local Melbournian, I feel lucky to understand the intricate systems that are required for tram travel. These can be broken down into four categories; choosing the right numbered tram and direction, the ticketing system, the hop on-hop off and avoiding eye contact with fellow passengers.

Tram trips from the outer suburbs to the city or inner city, is much like a bus trip you would think – there is one direction in and one out along a relatively straight road with few turns along the way. Unfortunately for tram systems however, they operate within an inner city circumference and are lucky to scratch the surface of the outer suburbs. There are three different numbered trams heading to the same location (for example, visitors to Melbourne, from Richmond you can take the 70 the 75 the 48 and the 109 into Docklands) and for the directionally challenged type, knowing which way Docklands is and which way Wattle Park is can be quite an ordeal. There are 24 of these systems in Melbourne.

Now that you have successfully bordered your tram or what you believe to be the right tram, you must buy a ticket. Proceed to the ticket machine conveniently located in the middle of the tram – coins only and you will pay up to $7.80 for a daily full fair (What a bargain)… Wait… Hold on… the city of Melbourne has just finishing introducing a new system. Get off the tram! You can’t buy tickets on the tram anymore… that would be too convenient. You should have known better and travelled to one of the two locations to purchase your non-refundable, $10 travel card known at “Myki”. So you have found the card and activated it with a $20 minimum credit and $10 card fee and you are back on the tram. Remember to validate by finding one of the ticket machines, no, not the green ones from the old system that are yet to be removed, the yellow ones, that are always “out of order”. Tap the blue dot (don’t insert the card) and wait until you hear the beep. Your money will be deducted. Disclaimer: If you do not do this again when you get off the tram, you will be charged more for not “touching off”.

Trams can be dangerous business as the most recent advertising campaign by Yarra Trams outlined in 2011 so make sure you ‘hop on and hop off’ with care.  Trams run down the middle of the road (in most cases) right alongside the moving traffic and parked cars. Cars are the most impatient obstacles on the road; they are supposed to stop when a tram stops at a designated stop for the passengers to move out onto the road from the footpath and onto the tram. They never do. This is less problematic for those that can see the cars coming when ascending the tram from the footpath but can prove catastrophic for those descending the tram if one does not ‘poke’ their head out the door to check before their body follows them. Take care and remember to push the button on your tram just before your stop otherwise the drive might not stop!

The tram can be quite the social experiment for those that are keen observers and enjoy watching others. There are some notorious tramlines that don Melbourne’s finest and there are others that, at the wrong time of night are worth avoiding. The 109 that travels from Docklands to Box Hill is home to many different ethic travellers as it travels through two of the most populated Viet and Chinese diasporas in the city. The 109 also travels through the areas with the highest Heroin trafficking in town so prepare for some unique discussions with addicts and dealers alike and yes, they will ask you for money. The 78 and 79 has the oldest running trams left in Melbourne, the W class and travels from Church Street Richmond all the way down Chapel Street to St Kilda Beach. Young and old alike, as the tram moves through the government housing estates of Richmond and Prahran, shopping carts are a constant trend and many European backpackers making a living in Melbourne frequent the line between the glam of Chapel Street bars and the lure of the Beach. Avoid the 86 and 96 at night, travelling out to Brunswick, violence and drunk youths are hard to miss but during the day are a pleasant ride out to the suburbs.

The Green W Tram series running down Chapel street… prepare no air conditioning on this one!

All in all, I love tram travel, it is a great way to get around the inner city, a relaxing place to read your book and the perfect location for watching (and smelling) others around town. Almost everyone from the elderly to school kids commute via tram and I can’t see why anyone would want to travel any other way.

← The exorbitant Sydney
The year of the snake. →