Nestled behind the dated, trashy and not so eloquent Jam Factory and Chapel Street (sorry South Yarra residents but it’s true) is one of Melbourne’s finest cheap eats. It’s simple, classic and has a touch of the northern suburb hipster-grunge that is so very in vogue these days. This appeal makes the restaurant-bar the most out of place, beacon of light on the strip. It is of course, the Sweetwater Inn. 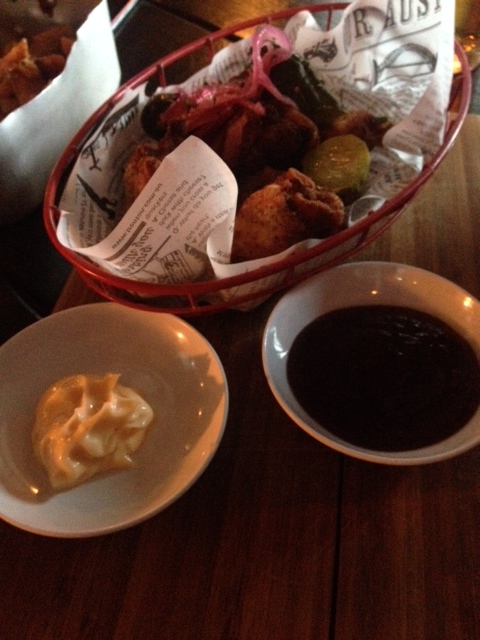 Unassuming from the curb, with a modest outdoor smokers area, the interior is lavished with corrugated iron walls, large wooden roof beams draped in snake skin, mounted farm machinery including windmills, axes and fans and of course the obligatory Steve Irwin signed portrait behind the bar. At night, the space is dark and comforting allowing the constantly full communal beer barrel tables, corner lounge sections and bar stools to condense the floor space with a considerable spill out onto the street. Yet during the day the space is light open and friendly and surprisingly big.

Despite the unsubtle tones of Australiana, the farmhouse, country pub feel of Sweetwater Inn has a distinctly Deep Southern USA, final frontier vibe, which is more evident when coming to the menu; Buffalo wings, BBQ pork chop and smoked pulled lamb. Of course, there is that northern suburb hipster surprise on the menu too, with a huge selection of vegan food, which is by far the best I’ve tasted in Melbourne. From vegan (and non vegan) sausage rolls to pulled mushroom blend rolls with slaw and the “vegan fish”, there really is something for everyone on the menu. And with prices ranging from $6 to $26 it is healthy for your pockets too.

One large basket of steaming hot chips covered in cheese and gravy. PERFECTION

Fosters is making another comeback piped in and on tap and a selection of Australian cans from VB and Melbourne Bitter to White Rabbit and Coopers in bottles are on offer as well as $10 novelty cocktails including a gin Billy Tea right through to a bright pink Nikki Webster in a jar and a Kevin Bloody Bacon that can even be made vegan friendly.

An ice cold gin and tonic with West Winds Gin

The staff are fun, bearded (naturally) and relaxed and the vibe very much suggests they don’t care where you’re from, your behaviour or how long you stay. Sweetwater Inn seriously lacks pretention and is quite possibly the most relaxing hipster haunt in Melbourne at the moment.

← A well rounded American taste in Melbourne
Visit Victoria: The spoils of Bendigo putting itself back on the map. →