Travelling for miles on the outskirts of town to trudge through muddy ditches and climb over two-metre high wire-fences results in ripped, pulled and scratched clothing as well as a nice escort off the premises. Trespassing on the cities many abandoned sites is a synonymous pastime and Berlin right of passage. Whilst both thrilling and intriguing the long out-of-town journey and potential disappointment of many locations is somewhat off-putting.

Looking out over the site.

Fortunately, the Königin-Elisabeth-Kinderkrankenhaus on Treskowallee not too far from Sisyphus is an inner-ring exception. Named after Queen Elisabeth of Prussia, the hospital was opened in April of 1843. Moving locations several times, the hospital made its final move to Oberschöneweide in 1910 where it supported 130 patients. Within a couple of years, after an epidemic of scarlet fever, the hospital was downsized and eventually became a military hospital during the First World War. With the Nazi takeover in 1933 the site continued as a military base until the Soviets took over in 1945, kicking out any remaining patients, until 1994. The site was bought back from the state soon thereafter with promising plans to develop a nursing home, social housing and supermarket complex all of which were sadly never realised. The site was eventually sold off in parts and many buildings were torn down to make way for a new elderly centre while the rest of the land lay dormant.

One of the two remaining buildings at the Kinderkrankenhaus.

Two wings, a shed and a couple of underground storerooms are all that remain on the site. The front building is popular with squatters and more difficult than the rear to enter. Protective of their borrowed homes, the many homeless that occupy the front building work hard to keep their privacy. This building is however far less interesting than the back one which you’ll have full access to. Watch out for falling roof tiles, shards broken glass, flooding and ice during winter and be careful not to fall through the rickety stairs. Passing these obstacles, inside you’ll find slight reminisce of the hospital’s infrastructure including bathrooms, eerie corridors and large patient rooms but no signs of equipment. There are many murals and spectacular views of the surrounding land as well as the decay of what was left behind.

Some of the artwork on the walls in the halls.

With no security patrolling, it is an easy 1/10 level of difficult to access the site entering via the detached gate on the footpath at the front of the land. If you’re looking for more adventure, you can access via the right hand side of the front building by crawling under a large water pipe. 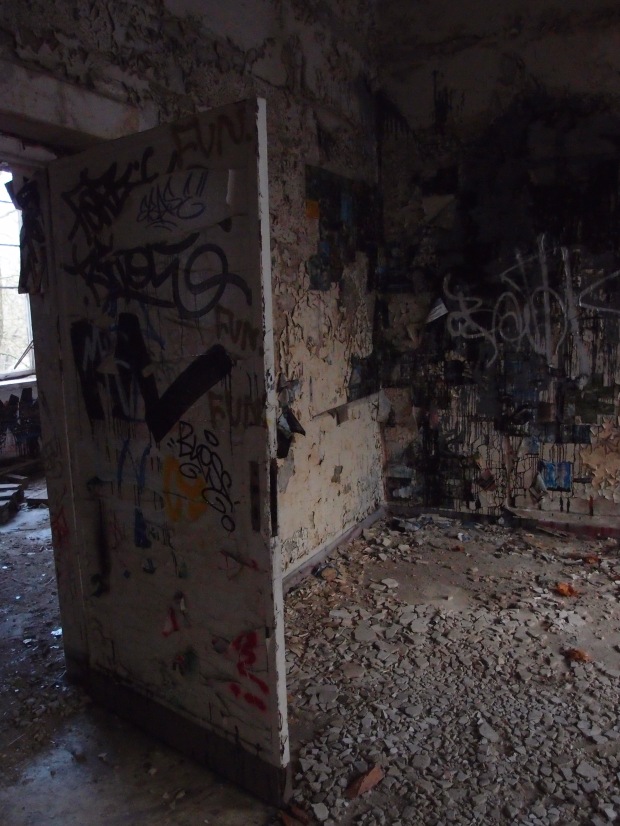 Photography by the lovely Benjamin Johnston

This article was written for Berlin Logs. You can see the full article here.